Rob, a regular patient for many years, booked a treatment and anounced that he was going to cycle Lands End to John O’Groats in 2 months time. When asked if he had a bike he replied “no where do you recommend going?”. He also said that he hadn’t cycled since he was a teenager.

I must admit, after hearing this and going out for his first ride with him,in Richmond Park (he was on his spanking new touring bike with yellow panyas), I thought that he was being very optimistic!! Rob does however thrive on a challenge and this was another of those.

Having had a quick lesson on how to change an inner tube and deciding on what amenities to take, he loaded up the panyas and set off on the train to Lands End with a road map and no GPS, on wed 6th Oct. 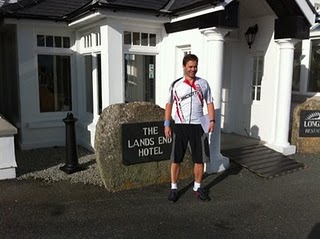 Lunch at the Hotel before setting off. Where did I park my bike?

After hearing that he’d made it to Wales, cycling up to 12 hrs a day, things were looking promising. Having no reply to my texts over the next week, I thought that he’d booked into a spa for the rest of the time! Finally recieved a text yesterday (sun 17th) followed by a phone call saying that he’d made it and that the good weather had made all the difference.