Core exercise programmes tend to focus on the trunk muscles ie deep spinal & abdominal muscles, however the gluteal or buttock muscles are just as important, particularly for runners.

The gluteals are made up of 3 muscles: gluteus maximus, medius & minimus and have a very important functional role in stabilising the lumbar-pelvic region.

The gluteals are made up of 3 muscles: gluteus maximus, medius & minimus and have a very important functional role in stabilising the lumbar-pelvic region.

Their Role in Stabilising

During running the gluteal muscles act as stabilisers with maximus helping to maintain upright posture. Medius & minimus work together to maintain a level pelvis when weight bearing on one leg. The figure below shows someone with normal & weak gluteus medius/minimus. 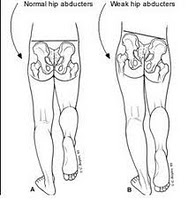 Try this simple test in front of a mirror to see if your hips remain level if they don't, try hitching the lower one up.

How to Train them

The big mistake that many people make is to train these muscles individually, no muscle works in isolation. Muscles must be worked functionally and mimic the movements required of them, be it running, cycling or just lifting a box. These stabilising muscles tend to become weak or ‘switch off’ and consequently do not have enough endurance for most activities, never mind running for 4+ hours. The best way to train the stabilisers is with light loads and many repetitions or long static holds, in positions that mimic your activity, in this case running.

The Bridge
When running we tend to flex or lean forward from the waist and if maximus is not being recruited enough to keep us upright, this can lead to low back pain (LBP). Try the bridge exercise to help improve the ability of maximus to extend the spine. Lie on your back with knees bent, draw in the lower abdominals (keep breathing) and gradually curl your buttocks off the floor as below, squeezing your buttocks. Try 10 reps and hold for 10sec building to 5 x 30sec and then 3 x 60sec.

One-leg squat
This exercise not only trains leg strength but also medius and minimus for pelvic stability. Stand upright on one leg in front of a mirror, draw in lower abdominals and squat down pushing your bottom back making sure to keep your knee pointing forward over your laces and your hips level. Squat as far down as you can without loosing balance or form. Try 3×10 on each leg. This can also be performed leaning up against a swiss ball if you find it hard to balance at first as below.