Tissue Healing:inflammation & how osteopaths treat it. 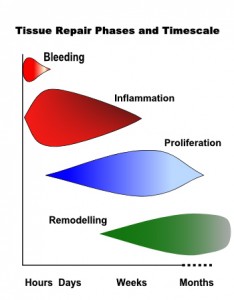 As osteopaths or manual therepists we are mainly dealing with soft tissue injuries. Whether muscle, ligament, tendon or fascia is damaged the healing or repair process is an orchestrated series of overlapping events, aiming to restore structure and function. These overlapping events start with the bleeding phase and ideally finish with remodeling . I will be focusing this blog on the inflammatory phase of  healing.

Bleeding is the first  fairly short phase. All tissues bleed when injured, some more than others. Muscle will bleed more and for longer as it is more vascular (ie a better blood supply) than ligament or tendon. Generally bleeding will last a number of hours as shown in the chart opposite.

What should we do in this phase? There is not a lot to do but what we do is crucial. Only ice can reduce blood flow. Ice is a vasoconstrictor when used for the correct duration. Prof Tim Watson (2011) suggests the optimum icing time of 10min on 10mins off x 2. By the way alcohol is a vasodilator and therefore increases bleeding as does over icing.

Inflammation is a crucial stage of the healing process and therefore I am focusing this blog on the inflammatory phase of tissue repair. As mentioned previously the stages of healing are not independent of each other but rather overlap. The inflammatory stage begins within hours of bleeding and progresses to reach its peak with a few days.  Swelling is essential for injury repair and not a hindrance as often thought. Swelling or odema helps protect you from further damage by preventing as much movement, it also contains all the essential chemicals that will be used throughout the healing process.

What should we do in this stage?  We might all be aware of  RICE or PRICE. Protection, rest, ice, compression & elevation. Follow this advice and you can’t really go wrong.  PRICE limits the swelling but its aim is not to prevent this necessary reaction, it speeds up resolutioin. Compression can be a bandage, gentle massage or gentle exercise/movement to promote local blood flow/fluid exchange. Osteopathic treatment is not anti-inflammatory but pro-inflammatory effecting the speed and efficiency of the process.

What NOT to do!  The inflammatory process stimulates or initiates the next stage (proliferation) via release of chemicals. Therefore WHY do we rush to the pill box and pop ANTI-inflammatories or NSAIDs (non steriodial anti-inflammatories)? Probably due to the constant TV advertising, GPs & medicals companies promoting their effects.

NSAIDs are not promoting the healing process but rather have a negative effect on tissue healing and the long term state of the damaged tissue. It is thought that both steroidal and non-steroidal anti-inflammatories may be responsible for tendon degeneration ie: tennis elbow (Allen et al 1980). NSAIDs also block prostaglandins which promote inflammation and protect stomach lining from acid. Therefore NSAIDs inhibit inflammation, pain, fever and clotting and increase the risk of stomach ulcers.

It is also important not to irritate the injury by over exercising/overusing the area as this will increase the length of this phase and overall repair.

How Osteopath West can help you. After the initial bleeding stage and ideally the following day osteopathic treatment can be most effective in all of the following stages to gain optimum recovey. 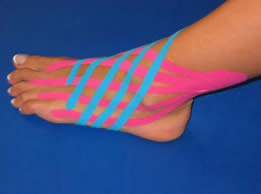 We use gentle soft tissue techniques to aid the inflammatory process combined with gentle mobilisation to aid fluid movement and to reduce stiffness. Kinesiology taping is excellent used in the early stages for lymphatic drainage and later to ease the tension in tight or shortened muscle. Western acupunture can aslo be used to aid the healing process and to reduce those painful, irritating, fibrotic trigger points. Exercise rehab combined with stretching is helpful in the later stages which is carried out in our gym at Bodyline Studios in Ealing.