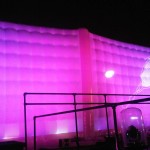 This was a great event, The Mens World Squash Series Finals at Queens Club, West London. The Saudia Arabian sponsors /promoters aimed to ‘sex-up’ the game in this impressive bubble with an all-glass purple squash court.

The squash matches were best of 3, instead of the usual best of 5 and were fast and furious and I was impressed with their speed and racket skills. Jake Humphreys better know in F1 was the MC  for the first few nights and they had street dance in between matches.

Unfortunately due to high winds on the finals day the bubble was ripped and the final between Matthews (Eng) &  Shabana (Egy) still hasn’t been played.

Watch this space for an up-date from PSA on when the final will be played.